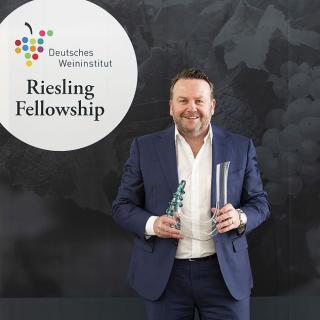 In his role as Editor-in-Chief for Perswijn, the Netherland's leading wine magazine, Lars Daniëls traverses all corners of the world of wine. He also writes for the Danish wine magazine DinVinGuide. He has penned numerous articles about German wine for both publications. The MV behind his name stands for the highest Dutch distinction for wine, the "Magister Vini." In 2007 Lars Daniëls became just the third person ever to earn that title. His thesis while working toward that difficult examination established a travel atlas for the world of Riesling, with a special focus on German Riesling. Today, Lars is responsible for process control within the Magister Vini organization. He is also a lecturer at the Dutch Wine Academy, responsible among other topics for instruction on German wine. His deep well of expert knowledge has made Lars a high-demand wine speaker across his country.

Before becoming a wine journalist and wine educator, Lars Daniëls studied French language and literature, worked in the hotel industry and at a wine store. His interest and love for German wine, and Riesling in particular, came after a visit to Weingut Reichsrat von Buhl. His parents and sister lived in Germany, which helped reinforce his relationship to German wines. But his love for Riesling was also kindled in memory of his friend René van Heusden, who toured extensively with Daniëls through the German wine regions before his unexpected passing.